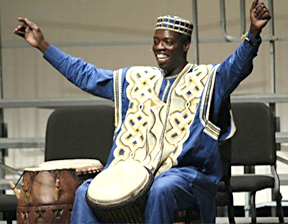 Kofi Dennis is a drummer, performer, and educator. He earned a degree in Early Childhood Education at the Komenda Teaching College, University of Cape Coast in Ghana, West Africa, and a degree in Theater Arts (creative dramatics) from the School of Performing Arts at the University of Ghana. Before moving to the United States in 1995, Kofi taught academics and lead performing arts programs at schools, correctional facilities, orphanages, and child-care centers in Ghana. He also starred in radio and stage theaters, television and video productions in Ghana. Since being in the DC metro area, Kofi has educated and entertained as a drummer, storyteller, singer, and dancer at venues such as the Kennedy Center, Discovery Theater, the Smithsonian Folklife Festival, and Wolf Trap’s Theater in the Woods and Filene Center. He has taught creative drama at the Montessori School of Northern Virginia in Annandale for the past 10 years and has been a Wolf Trap Teaching Artist since 1998. He is recognized as a master teacher/trainer and presenter of West African Culture. Kofi runs Playing for Concepts and founded Class Acts Arts which features an outreach program is for at-risk youth in DC area correctional facilities. He has worked with World Children’s Choir to lead an African drumming for peace initiative and performs as half of the duo Anansegromma, presenting music, dance, drums, games, and stories.