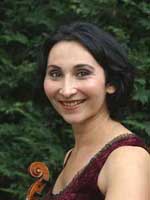 Monika Dorosheff is an educator, recording artist, and an active violin soloist. She is a frequent performer at Dumbarton House, Strathmore Hall, Schlesinger Hall, Hylton Performing Arts Center and The CenterStage in Reston. Monika has appeared as concertmaster of the International Symphony Orchestra of Schloss Weissenstein Festival in Germany, Mid-Atlantic Symphony Orchestra in Maryland, the New Dominion Chorale in Virginia and the American Festival Pops Orchestra at the George Mason University. In 2009, she debuted at Carnegie Hall. She is a member of the first violin section of the Washington Concert Operation and acting concertmaster of the Mid Atlantic Orchestra and the American Festival Pops Orchestra. Monika holds a Performance Degree from Yerevan State Conservatory in Armenia and an Artist Diploma from the Bowling Green State University in Ohio. She has been teaching for over a decade and has seen many of her students win top awards at competitions such as the Asian American Music Society International Competition, the American Youth Philharmonic Young Artists Competition, and the Rockville Competition for Solo Strings. Monika and lives in Herndon with her husband and two sons who also play violin and cello.